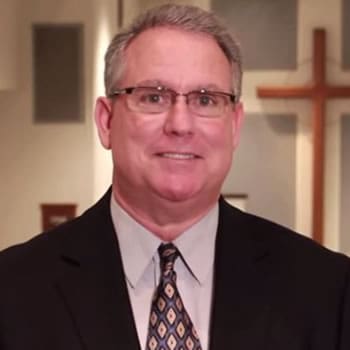 Lance was born in Arizona, but spent all of his growing up years in rural Arkansas. His parents divorced when he was 4 years old, leaving his mom to raise him and his sisters alone. Always seeking a better job or life for herself, she moved their little family eight times throughout Lance's childhood. Since his mother studied with Jehovah's Witnesses, Lance never heard the truth about Jesus Christ.

As a freshmen student at Arkansas State University, Lance picked up a Bible someone had given him years earlier and began to read. Over the course of several months, he learned the truth about Christ and his own desperate need for forgiveness. Alone in his dorm room, he repented and believed the Gospel. His life was immediately transformed. He began to pray that he would meet a Christian so he could begin to learn and grow along with someone else and not just all on his own. Shortly after this prayer, a fellow student knocked on his dorm room door and asked if he would like to come to a Bible study! Over the course of the next 3 years, Lance was heavily involved in Campus Crusade for Christ and listened to thousands of John MacArthur sermons!

Upon graduation from Arkansas State in 1982, he went to Colorado Springs, Colorado for a summer of staff training for Campus Crusade for Christ. It was during that summer that he came to the settled decision that what he really wanted to do was go to seminary to be trained for the pastorate.

Instead of going on full-time staff with Campus Crusade, he pursued further education via seminary. His first year of study was at Mid-America Baptist Seminary in Memphis, Tennessee. After one year there, he transferred to Talbot Seminary in La Mirada, California. It was then that he had the privilege to begin attending John MacArthur's church, Grace Community Church, in Sun Valley, California. When MacArthur began The Master's Seminary in 1986, Lance was thrilled to transfer all his seminary credits into that school and receive his Master of Divinity from TMS.

Beth, born and raised in Iowa, and a graduate of Moody Bible Institute in Chicago in 1984, was studying at Biola University in La Mirada, California, during the 1985-1986 school year when she met Lance on campus. They were married at Grace Community Church on October 24, 1986.

From 1986-1996, Lance served on the pastoral staff at Grace Community Church. Many of those years were spent as John MacArthur's personal assistant and senior associate pastor. He received his Master of Theology from The Master's Seminary in 1996.
In 1996, Lance and his family returned to his home state of Arkansas where he became the senior pastor of The Bible Church of Little Rock. The Quinn's enjoyed 15 fruitful years of ministry in Little Rock. In 2011, John MacArthur began a new ministry at Grace Community Church called Grace Advance and asked Lance to return to California to direct this new ministry.

Over the course of his 31 years of pastoral ministry, Lance has enjoyed serving on the boards of F.I.R.E (Fellowship of Independent Reformed Evangelicals), The Expositors Seminary, The Master's College & Seminary, Friends of the Spurgeon Library, Truth Exchange (The Ministry of Peter Jones), and ACBC (Association of Certified Biblical Counselors), formerly known as NANC (National Association of Nouthetic Counselors).

Lance has co-authored or contributed chapters to several books: The Five Points of Calvinsism (P & R Publishing), Preaching: How to Preach Biblically, Pastoral Ministry: How to Shepherd Biblically, and Counseling: How to Counsel Biblically (Thomas Nelson).
Lance has served as an adjunct professor at The Master's College & Seminary, a resident professor at The Expositor's Seminary in Little Rock, Arkansas; and a guest professor at Cornerstone Seminary in Vallejo California.
As a conference speaker he has spoken in Italy, Russia, Ukraine, New Zealand, Canada, South Africa and Zambia.

Since Lance's heart is to shepherd his own flock and his gifts are in counseling and expository preaching, he is excited to become the founding and senior pastor of a new ministry, Thousand Oaks Bible Church. This church plant launched its first worship service on January 4. 2015. Thousand Oaks and its vicinity are blessed to have a church option with a trained biblical counselor as well as a gifted expositor of God's Word at the helm.

Lance and Beth have been blessed with eight children and three grandchildren and currently reside in Thousand Oaks, California.

God’s Wisdom for Your Family

with Jason Houser, Lance Quinn
This weekend on the broadcast, get valuable advice for your family from pastor Lance Quinn and Christian songwriter Jason Houser as they share God's wisdom from the Scriptures. View Show Notes →