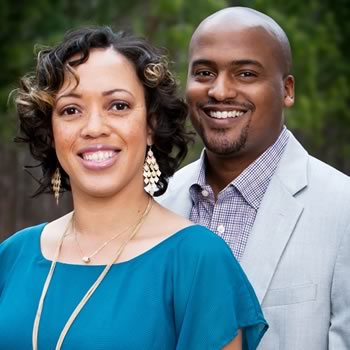 Lamar and Ronnie Tyler make up the husband and wife power pair behind Black and Married with Kids, the largest independent African American marriage and parenting site on the web. Fed up with the pervasive negative images of black marriage in the media, Lamar and Ronnie started the site to combat the negativity by focusing on positive messages about marriage in the black community. Armed with a passion for empowering married couples and a knowledge of how to leverage social media, Ronnie and Lamar have in eight years taken Black and Married with Kids from a small personal blog to an international brand under their own Tyler New Media umbrella that also boasts four independently produced films and a social media presence that includes over 500,000 Facebook fans.

Along with writing for and managing the Black and Married With Kids website, which now employs more than 30 regular staff writers, running Tyler New Media and producing and directing films, Ronnie and Lamar travel across the country screening Tyler New Media’s films and speaking on marriage and parenting-related topics for a variety of local and national media outlets including Essence Magazine, Parenting Magazine, Ebony Magazine, Sirius/XM, TV One, HLN, NPR, Atlanta Journal-Constitution and the Washington Post.

Lamar and Ronnie are the parents of 4 children and call Atlanta home. On the rare occasion that they have free time, they enjoy unwinding with dinner and a movie.

with Lamar and Ronnie Tyler, Ron ...more
Ronnie Tyler may have been in love with her husband, Lamar, but she wasn't that interested in his help with raising her two children. Ron Deal explores the complex nuances of blended relationships. View Show Notes →

4: Caught Between Your Spouse and Your Family

with Lamar and Ronnie Tyler
She may have been in love with Lamar, but as a strong self-confident woman, Ronnie wasn't that interested in Lamar's help raising her two children from a previous relationship. Exploring the complex nuances of blended relationships. View Show Notes →