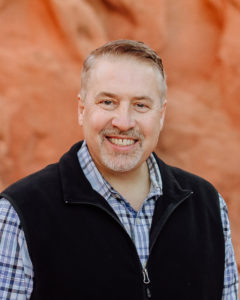 Dr. Greg Smalley serves as the vice president of Marriage and Family Formation at Focus on the Family. In this role, he develops and oversees initiatives that prepare individuals for marriage, strengthen and nurture existing marriages and help couples in marital crises.

Prior to joining Focus, Smalley worked for the Center for Relationship Enrichment at John Brown University and as president of the National Institute of Marriage. He is the author of 17 books including “Fight Your Way to a Better Marriage,” “The DNA of Parent and Teen Relationships” and “The Whole-Hearted Marriage.” He and his wife, Erin, co-created “Ready to Wed,” a complete premarital curriculum for engaged couples and the online Focus on Marriage Assessment. They also released “Crazy Little Thing Called Marriage: 12 Secrets to a Lifelong Romance” in 2016.

Smalley’s passion for marriage began as a young boy. He is the son of the late Dr. Gary Smalley, a family counselor, president and founder of the Smalley Relationship Center and author of 40 books on marriage. Smalley regularly attended his father’s conferences and absorbed the importance of marriage. He frequently had people come up to him at events and say, “Your dad saved my marriage.”

Married since 1992, Greg and Erin live in Colorado with their three daughters, Taylor, Murphy and Annie, and their son, Garrison. Smalley brings at least one child to every age-appropriate event, exposing them to the crucial role marriage plays in the family and society.

The Smalleys – who with help overcame their own struggles early on – make a point to study a marriage book together every Christmas.

with Greg Smalley
Feeling lonely in marriage? Dr. Greg Smalley offers ideas to help you resolve conflict, start talking about what you're carrying -- and move back together. View Show Notes →

with Greg Smalley
Life has a way of moving us into roommates in marriage when we want to be soulmates. Ron Deal talks with Dr. Greg Smalley about how to stay deeply connected. View Show Notes →

76: Moving from Roommates to Soulmates in Marriage

with Greg Smalley
Life has a way of moving us into roommates in marriage when we want to be soulmates. Ron Deal talks with Dr. Greg Smalley about how to stay deeply connected with one another, even during seasons of exhaustion or busyness, with a few intentional actions. View Show Notes →

with Greg Smalley
The year 2020 has been a year of forced togetherness--or forced isolation--paired with additional stress. Greg Smalley gives suggestions for ways to manage stress in marriage and grow together, rather than apart. View Show Notes →