They Were Living in Survival Mode

For Dusk and Amy Bennett, the early years of marriage started like they do for most couples: They learned to adjust to each other’s habits and preferences. They shared their dreams for the future. Amy learned to cook. They discussed their plans to start a family in their Los Angeles home.

But they soon learned life doesn’t always go as planned. After several miscarriages, Amy gave birth to a healthy baby girl, Sierra, in 2007.

“We had our daughter, who was wonderful, and life was great,” Dusk recalls. “Nothing could be wrong.

“And then, of course, everything kind of fell apart.” 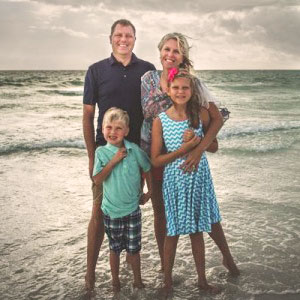 After Sierra’s second birthday, they decided to expand their small family. Amy quickly became pregnant again, but at just 10 weeks the doctors saw something abnormal. Further testing showed their baby had Down syndrome. Given the option to terminate the pregnancy, they quickly declined.

“We had always said we were pro-life,” Amy says. “But you never really know how your spouse is going to react until you’re presented with the situation. We both felt very strongly that it was God’s provision to give and take away life.”

Shortly after, their baby passed away at 15 weeks.

Another miscarriage followed, but it wasn’t long before Amy was pregnant again. She passed the first trimester, and nothing abnormal showed up in early testing. But at 17 weeks, Amy and Dusk received the news no parent is prepared for: Their baby had Hypoplastic Left Heart Syndrome. Plainly speaking, the left side of the heart had not formed. Their growing baby only had half of a heart.

In February 2010, Bodie was born, and the Bennetts’ world turned upside down. Amy says he had a much rougher course than anyone had envisioned.

During Bodie’s first year, they came close to losing their son a number of times. He had three open-heart surgeries during his first year of life—at 5 days old, and again at 2 months and 7 months.

While Bodie remained in critical condition at the hospital, Amy lived there too. On the nights she could, she made the 45-minute drive from the hospital back to their home to have dinner with Dusk and Sierra before helping get her daughter to bed. Afterward, she drove back to hospital to sleep. Dusk continued his full-time job while taking care of his daughter with his wife away. He says it was a very difficult time for their family and their marriage.

“I was numb,” Dusk says. “The whole experience is just so surreal you just can’t feel anything. And certainly that doesn’t help a relationship with your spouse when she’s literally there doing everything and then I’m removed from the situation, completely numb to everything … You just kind of check out. And for the longest time that’s kind of what I did.”

Amy says, “I would not say my husband and I did a particularly good job of processing. I would love to say we leaned into each other and it made our marriage stronger, but it didn’t. It was one of the hardest periods of our marriage.”

Stuck in a hurricane

They managed to make it through the next couple of years, as Amy puts it, limping along. But life continued to storm around the Bennett family. With their son now home and the couple learning to live a new normal, they came home one day to discover someone had broken into their house. The trauma of the burglary just added to the stress Amy and Dusk were already under.

“My husband and I looked at each other and were like, ‘We’re not going to make it. We can’t do this if we don’t get things figured out,’” Amy says. At this point, they knew they needed help.

A pastor friend stepped in to offer marital counseling and helped the couple refocus from how long their journey ahead was, to how far they had come as a family. Dusk and Amy planned to re-center their lives on each other, and took a weekend trip for their anniversary. Yes, they had a long road ahead with their son, but they were determined to make it through together.

And then Dusk was diagnosed with Meniere’s disease, an inner-ear imbalance. After just a week on a steroid, he developed avascular hip necrosis. The necrosis caused enough damage that at age 39, Dusk learned that he would ultimately need to have both of his hips replaced. The following year, he suffered two heart attacks.

“As a young to middle-aged male, so much of how we view ourselves is tied to our physical identity,” Dusk says. “From a psychological side, it’s had a huge impact on our marriage because it’s lit a fire inside that’s not a good one … Lit the dormant anxiety I didn’t realize was sitting there, and it’s made me much more prone to anxiety and panic attacks.”

As the young couple were just beginning to realize the long road ahead with Dusk’s health, they got more heartbreaking news about their son. Just after Bodie turned 3 (after Dusk’s first hip replacement), they learned their son would need yet another surgery.

Bodie’s surgery did not go as planned. The doctors had to go back in for a second operation three days later, and then their son had to endure a complicated nine-month recovery that included a life-threatening infection. Following this, Bodie seemed to be doing better.

“When you’re going through that much, it’s sort of like being stuck in the middle of a hurricane,” Dusk says. “If you’re realizing you’re under attack and you have nowhere to go, you hunker down. And you’d rather be hunkering down with somebody than with nobody. So you grab onto the first thing you have. In that case, it was my wife.”

Despite everything happening around them, they chose to safeguard their marriage further. They signed up to attend a Weekend to Remember® marriage getaway.

Then the storm hit home in a different way. Their house caught fire. “It was by the grace of God we were home and managed to get out and none of us injured,” Amy says. “But we stood on the street and watched our house burn, which is something you can’t even put into words.”

The fire was ultimately contained in the attic, but the smoke and water damage was devastating. With their home being taken down to the studs, and their family living in a hotel room, no one would have expected Dusk and Amy to follow through with their plans to attend the marriage getaway.

Rebuilding their home and marriage

Two weeks after the fire, on the day they picked up the keys to a rental home, Dusk and Amy left the kids with her parents and drove to Ventura to attend their second Weekend to Remember® marriage getaway. (They had originally attended when they were engaged.)

“One of my big takeaways was I had totally missed the boat,” Amy says. “It wasn’t about putting up with how your spouse is different, but it’s actually recognizing what their unique talents and gifts are that God gave them. I need to look at what he brings to the table that’s better than what I bring and really learn from our differences and seek out the positive.”

After the conference, Dusk and Amy visited what was left of their home. Dusk remembers seeing the shell of the home they shared. From the front door, he could see into their backyard, where their children had played just two weeks before. While they were rebuilding their home, their marriage was going through a rebuilding of its own.

“This is the beginning of our grief,” Dusk says, remembering those moments standing next to his wife. “And we’re going to have to focus on our relationship with each other if we’re going to make it through this alive.”

“We came home with so much hope,” Amy says. “You just feel like, we can do this. Whatever’s going to get thrown at us, we can do this. We have some great tools now, we’re communicating better than we had in years. I think whatever you’re going home to, if you let the conference really sink in and resonate, there’s so much that can be brought home with you.”

When the rebuilding of their house was complete, and the Bennett family was once again home, life continued as usual. But in 2016, Bodie had another surgery that threw him into heart failure. Amy says right now is a period of unknowns for their family—the only thing they do know is that at some point he will need a transplant—but they are making the most of it.

“We’re trying to learn to appreciate each moment of life where we’re at,” she says. “I feel like it’s hard, in any marriage, not just one that’s dealt with the trauma we have. It’s easy to get lost in the minutia of the day-to-day life.”

Dusk, who also teaches recording students at Loyola Marymount University, is often asked about how to make it in the music industry. His marriage advice to young couples is the same he offers to students.

“I understand why God said, ‘It’s not good for man to be alone.’ Certainly if we lived in paradise, we wouldn’t have to worry about single-chamber hearts and houses burning down, but the reality is we were meant to be together with somebody else. He never promised it was going to be easy … Be prepared for the hard stuff. If you can manage it, you’ll be fine.”