She Was Repulsed by Her Husband

When Star Molegraaf reluctantly stepped foot into the marriage counselor’s office, she had no real desire or hope to repair her broken marriage. Surely, she thought, God would not want her to remain in a miserable relationship.

But then her counselor asked her an unexpected question. He asked if she believed God raised Jesus from the dead to save her. 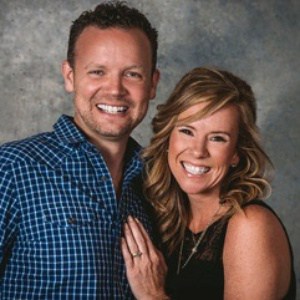 Then he asked, “You don’t think that same God can heal your marriage?”

That question had a huge impact on Star. “I felt like the Lord just said, ‘You know what? You’ve never been able to see clearly, but today you are … I’m going to show you what love looks like,'” she says. “And I felt like maybe I just believed it just a little bit.”

“When we started our marriage, we had everything going against us,” Hans Molegraaf says.

And it definitely started on rocky soil for the then 19- and 20-year-olds. After dating for little more than a year, the young couple found themselves planning their wedding over a positive pregnancy test.

For Hans, it was a make-or-break moment. Growing up in a Christian home, he had seen his father model what a husband and father should be. He knew he immediately needed to quit college, find a job with benefits, and provide for his now growing family.

Star, on the other hand, was fearful. Her parents had divorced when she was young, and her mother’s second marriage was not a healthy one. Marriage had not been modeled well for her.

To this point, their relationship had been a whirlwind. Their time together had been fueled by alcohol, arguments, and infatuation. As Star put it, they were wild and free—just doing whatever they wanted to do. And now they were going to be parents.

“We know marriage doesn’t fix problems,” Hans says, looking back on their first year. “Marriage just exposes the problems for how bad they really are.”

Their first year of marriage was highlighted by screaming and fighting. They didn’t know how to resolve conflict. Star said everything she thought or felt.  She was a “confronter”—a defense mechanism she says she developed from her childhood.

Hans was the total opposite. Star would push him to talk about their issues to the point he would explode. Hans says he couldn’t win arguments with his wife, which led to him backing away from the arguments further.

“It feels helpless,” he says. “If I don’t have a voice in this, or I can’t compete verbally with my wife, why even try?”

And then there were the times when the arguments would explode physically. Out of frustration, Hans would grab Star by the shoulders and shake her. Once, he threw her down on the bed.

Star’s worst fears of marriage were being played out in front of their young daughter. “There were times when he would just pick up clocks and throw them—whatever was around, punch through the wall—just dysfunctional anger,” she recalls. “Pretty much anything you could imagine, it was going on in our house.”

Realizing the marriage had spiraled out of control, Star begged Hans to see a marriage counselor. But Hans admits pride kept him from agreeing. He thought he could fix it, could prove wrong those who had doubted their marriage would last. He told himself he was strong enough, good enough … that they were different.

As time went on, Star slipped away from their marriage emotionally. One night, while out with a group of friends from high school, an attractive man approached her, pursuing her attention. Soon after, Star found herself in an affair.

“When all that goes on in your home, your feelings are affected,” Star says. “Intimacy is destroyed. Oneness is not an option.” For her, the affair was a chance to start over. As she puts it, the affair “was very enticing. Everything about it is just like a movie. There’s no reality in an affair. It was just fantasy.”

Returning from a week-long business trip, Hans walked into his home to learn that his wife was moving out. “I’ll never forget pulling up in the driveway,” he says. “She had her bags packed with our daughter, and she was going to move in with her mom.”

Separated, the two shared custody of their daughter. One night, with their 2-year-old in the backseat, Hans followed Star to an apartment complex. Keeping his distance so she wouldn’t see him, he waited and left a note in her car. He knew.

With his wife gone and apparently moving on from their marriage, he returned home to live with his parents. They welcomed him back into their home, but his father insisted on one condition.

Marriage counseling for one

To live in their home, Hans’ father insisted his son see a marriage counselor. Hans was taken aback. Didn’t his parents see Star wanted nothing to do with him? But the sessions weren’t for the couple—they wanted Hans to go by himself.

Hans went, but reluctantly. He laid out every one of Star’s flaws before the counselor. He told him of the affair that she was still denying. He said she didn’t give him the respect he deserved as a husband.

But what the counselor said resonated on a different level. He talked about Philippians 2, which says we should “Do nothing from selfish ambition or conceit, but in humility count others more significant than yourselves.” Then, Hans recalls, he explained the idea behind the passage, “How Jesus Christ came to this earth, and He deserved everything. He deserved for people to worship Him. He deserved for people to bow down to Him. He came and He deserved to be served. Yet He chose the attitude of a servant, and He served the people He interacted with.”

It was in that moment, Hans says, that a spiritual transformation took place. When he compared his life with how Christ lived His life, his sin was exposed. He stopped pointing his finger at Star, and pointed it back at himself.

With the change that was happening in Hans’s life, he turned back to his marriage. But healing the relationship wasn’t easy. Star was still secretly seeing someone and was skeptical of the change she was seeing in Hans. Apprehensively, she agreed to attend a counseling session.

The hour was similar to Hans’s first visit. She outlined everything Hans had done for the counselor. What it was like to live with a man who seemed fueled by anger and control, and the fear she lived in. She admitted that Hans was starting to change, but it was too little, too late. She could never feel anything but disgust for Hans again.

The counselor asked her if she believed in God. In Jesus’ death and resurrection. And then he posed the question that changed everything: “You don’t think that same God can heal your marriage?”

In that moment, a little spark of hope began inside Star’s heart. What if God could do that? she began to ask herself. In that moment, Star says she turned her heart toward God just a “teeny bit.” Her counselor explained that her relationship with Hans was a visual picture to a broken world of who God really is. For the first time, she was understanding the gospel.

After that appointment, Star backed out of everything—the affair, friendships that supported it, even her job. If God was going to heal their marriage, she had to give it her all. She began to believe the change she was seeing in Hans. She would react to their arguments in the same way she always did, expecting to see the man she had married two years before. But time and time again, she says, he proved faithful. He was different.

But one aspect of their marriage had not returned. After all they had been through, all the hurt they had caused each other, she didn’t think they could ever be intimate again. The idea still repulsed her. So she prayed.

“I said, ‘Lord, I can’t live like this forever,'” Star says. “‘Can you change my heart? Help me to heal and feel the way I should about my husband.'”

Shortly after, Star says she started feeling things for Hans she hadn’t felt in a long time. Her heart was shifting, and she found herself attracted to her husband again. Star felt like a firsthand witness to His power.

After seven months of separation, the Molegraafs were once again living under the same roof.

But one thing was still holding Star back. She had never admitted the affair to Hans. So she prayed again. “Lord, let him ask me.”

One night, not long after that prayer, they were lying in bed together and Hans said, “Star, I need to know.” She confessed to the affair, and rather than the condemnation she expected, she felt the complete forgiveness of her husband.

From a broken marriage to a marriage ministry

A few months after the Molegraafs got back together, they attended a marriage conference at a hotel in Houston. They were still working on their marriage with a counselor, but the ideas and truths they heard at FamilyLife’s Weekend to Remember® marriage getaway reminded them they were moving in the right direction.

The weekend also planted in their hearts a desire to work in marriage ministry.

“We started to serve in our church, leading small group Bible studies, leading different marriage groups,” Hans said. “The other thing God did in that whole process was He allowed hurting couples to find us. Still, one of the things that blows me away is our story is so relatable.”

Nearly 10 years after their first Weekend to Remember, the Molegraafs joined the staff at FamilyLife. They served the ministry for four years before leaving to start their own ministry in Houston—Marriage Revolution—counseling couples one-on-one.

Now married for over 20 years and with six children, Hans and Star have helped numerous couples see what God intended for marriage through telling their own story at Weekend to Remember getaways or across a table over coffee.

The happily married couple have come a long way from their early years of physical, verbal, and emotional abuse. The change is radical, and one Hans is quick to credit to God 100 percent, not just for those moments 20 years ago, but for the ongoing moments ever since.

“It hasn’t been a cake walk,” he says. “It’s getting up every day and rejecting the mentality that led to the destruction of my marriage—the mentality of thinking that I can do it in and of my own strength. Getting up every morning and saying, ‘God, without You, without Your help … I’m going to fail miserably at marriage. But I know that with Your help, this thing can be good.'”

with January 31, 2023
Today, I'm talking to kids in single parent families and blended families and the adults who love them.