She Felt Oppressed by Her Marriage

Minutes after Dave Ashford left for work on August 31, 2009, a large moving van pulled up in front of his four-bedroom home. Without his knowledge, his wife, Sonya, had decided to leave him, after less than three years of marriage.

By the time Dave’s teenage daughter arrived home from school that day, 90 percent of the furniture was gone, along with the dog and cat. Almost everything had been taken from the house—even her bed. 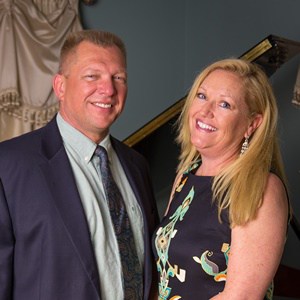 Dave knew his marriage was broken. But now, like the shattered glass of a picture frame, it was clear to him that it could never be put back together again.

Dave had been raising his two daughters for almost three years, while Sonya had been a single mom of one son for about six. He taught collision repair at a local high school; she was an attorney. He had to struggle to provide for his daughters; she knew a comfortable life. Yet they both wanted their kids to grow up in a two-parent home.

To Dave, Sonya was “intoxicating.” He was attracted to her beautiful smile, bubbly personality … just the whole package. And to Sonya, Dave was calm, patient with his children, and loving toward his parents. “I was drawn to that,” she says.

After dating for about six months, Dave dropped down on one knee in the presence of all three children and asked Sonya to marry him. She accepted. The kids cheered. A few months later they were husband and wife.

Sonya and Dave trusted that somehow things would just work out. After all, it seemed like their families would fit perfectly together. But neither Dave nor Sonya had considered the challenges of blending two homes into one. “Neither of us expected the enormous combination of stressors in the first year or two of our marriage,” Dave says.

It didn’t take much for arguments to start and there was plenty to argue about. If blending two families together wasn’t enough, they also had to deal with the stress of selling their individual houses and moving into a new home together. They also approached parenting differently, had a difficult time dealing with Dave’s ex-wife, and had opposite views about spending money.

Every holiday seemed to bring out arguments. One year Dave bought Sonya a heart-shaped box of chocolates the day after Valentine’s Day. “I did not feel treasured or valued,” Sonya says.

And their arguments weren’t pretty; they would yell and slam doors. Normally patient and quiet, when Dave became irate he got controlling and hurled verbal darts—right into Sonya’s heart. “He would get red in his face,” Sonya says. “It was horrible.”

It got so bad that one night Sonya told her husband, “I hate you.” As those words came out of her mouth she knew that it was time for action. She did not like the world that she and her son were living in.

“When I would hear Dave’s car pull in the driveway, I felt oppressed. I just wanted him to die,” she recalls. “I didn’t want to be near him.” So Sonya began moving small odds and ends into her office and had her mail sent there. Then she rented a house and scheduled for the movers to come. Sonya says she wasn’t thinking with love and just didn’t care about the consequences of her actions.

Dave was deeply hurt when Sonya and Peyton moved out, and very angry. He had known that they had some problems in their marriage but says, “I didn’t think the problems we had were that major.”

About a month after Sonya left, Dave agreed to meet her at a restaurant. She had planned to discuss how they should proceed with a divorce. “Part of me was ready to say ‘File whatever you want to,’” Dave says, “Yet, another part wanted to work things out.” He prayed that God would lead his conversation.

When Sonya asked him what he thought they should do, he astonished himself when he heard himself say, “We need to stay together and work things out.”

Sonya answered, “I would rather have a colonoscopy and a root canal simultaneously without anesthesia than to go to counseling with you.”

When Sonya returned to her office, she told her paralegal about her conversation with Dave. The woman said, “I think you should go to marriage counseling. Maybe you should just try.” So reluctantly Sonya agreed for her paralegal to set up a counseling session with Dave Shinault, the pastor of Centerpointe Church.

A few days after they went to their first session with Pastor Shinault, Dave heard a radio ad for a FamilyLife Weekend to Remember® marriage getaway. “He somehow convinced me to go to this thing,” Sonya says.

Even though she thought it was a total waste of time, as she sat in the audience listening to the getaway speakers, something unexpected happened. Sonya recognized some things that she had been doing wrong. For example, when she heard that she should forgive as Christ has forgiven her (Ephesians 4:32), she told someone nearby, “I really don’t like this part of the Bible because I don’t forgive easily.”

And when she heard that love doesn’t keep a record of wrongs, she thought about her journal, where she kept a record of her husband’s failures. “I had dates, times, conversations … everything recorded,” she says.

During the getaway Dave learned to accept Sonya as his perfect gift from God. He vowed that he would lovingly lead his family in all aspects of their home. And Sonya was convicted to follow his leadership. She realized that God had given Dave and her equal worth, but different roles in their marriage, and that their two families would never become one unless they fulfilled those roles.

Prior to the getaway, it had seemed like Dave and Sonya could never resolve arguments. For him, the resolution process involved two steps: Drink beer and wait for her to get over it. But now they learned how to “close the loop” of their arguments and come to some kind of resolution.

On the last day of the Weekend to Remember, Dave and Sonya renewed their wedding vows. This time, as they promised lifelong love, something was very different in their marriage: They knew how to make it succeed.

But “we were realistic enough to know that just one weekend conference would not be a cure-all.” Dave says. And they were still living in two homes.

“You need to tell people what happened”

After the marriage getaway, Dave and Sonya had a family meeting. They basically told the children, “God used this marriage conference to show us what we need to do. Things are going to be different from now on.” They said that they had not been the kind of couple or parents that they should have been. They asked the children for their forgiveness.

When they met with Pastor Shinault again, they told him how God had worked at the Weekend to Remember. He listened quietly, occasionally shaking his head. Finally Pastor Shinault said, “I don’t know what happened at this conference, but whatever it was, we need to get a hold of it. You need to tell people what happened.” Sonya told Pastor Shinault that she felt like she needed to take a megaphone and go on the roof of her house and tell everybody what she had learned, “Because I never knew any of this.”

Now, she and Dave are doing just that. They have led several HomeBuilders Couples Series® groups at the church, and they’ve brought many couples to the Weekend to Remember.

In January 2010, Sonya and Dave moved back into one home. But this time, chaos had been replaced with God’s blueprints for the family. Sonya is quick to point out that “we weren’t perfectly doing everything we should.” But they were trying, and the kids noticed.

Sonya recalls an evening when she and Dave got into an argument in their bedroom. “I got so mad that I got out of bed and went into the bathroom and slammed the door. Yet this time, she was quickly convicted that she was wrong.

“Dave hadn’t moved, hadn’t raised his voice, hadn’t done anything,” she says. So she opened the bathroom door and got back in bed.

Copyright © 2013 by FamilyLife. All rights reserved.