Go Back To All Foundations Articles

Before the Engagement Announcement

As I dropped the engagement announcement at our weekly team meeting, the reactions were not as enthusiastic as I expected. I thought everyone would burst into cheers, but instead, there was hesitancy. I could see them all looking intently at my body language and tone of voice, trying to figure out how I felt about the news before giving their reactions.

This response repeated itself dozens of times as I spread the word to friends and family. Over and over, people were cautious. I’d tell them my daughter got engaged, and they’d ask, “How do you feel about that?”

While I was surprised, the question is understandable. It’s easy for a parent to see flaws in any person their child is interested in. But sometimes the problems go deeper than mere personality differences and signify a choice in direct conflict with God’s will. Like if your child chooses to marry an unbeliever.

Too often, an engagement announcement is the opening salvo in a long and painful parent/child conflict. Such moments cause us to question, could we have done something differently?

Before the engagement announcement

No parent is perfect. We can always think of ways we could have done better. But even if we do everything right, the reality is our children have free will. They can choose to sin, choose to follow God’s path or not, and no amount of “good” parenting can guarantee any particular outcome. We cannot control who our kids marry, what careers they pick, if they have children, or where they choose to live. But just because we can’t control their choices, it doesn’t mean there aren’t things we can do to help steer them in a godly direction.

If you want to maximize the chances your child will choose well, before the engagement announcement, here are five things to consider.

1. Your marriage is their first model.

Training our children on how to choose a spouse starts much earlier than we might think. For better or worse, our children learn what is and isn’t acceptable in marriage by watching us.

Far more is caught than taught. If there is a lesson you want your children to learn, make sure they can see it lived out in front of them. Your marriage will help your children have a picture of what they should strive for. If your marriage is not what you want it to be, make time to invest in it.

Even if you’re a single parent, your story still lays the foundation for their future expectations. Make sure your kids have an age-appropriate understanding of what went wrong (and right). And if you are currently dating, what kind of screening process are you using? Is it a process you would be comfortable seeing your daughter or son mimic?

Married or not, do your children see you preaching one thing but living another?

I’ve never feared my kids dating, per se. I’ve always told them, “I want you to have a great marriage one day, so let me help you do this right.”

In addition to asking questions about homework and band practice, I would also occasionally ask my daughter, “Are there any boys you think could be potentials?” The question was designed to affirm the natural desire and help frame attraction as something to be rationally considered. Too often, attraction is portrayed as primal and uncontrollable, but it’s not. We can choose which passions to squash and which to give into, but we must train our kids toward discernment and discipline early.

Before kids hit puberty, they generally couldn’t care less about the opposite sex. When they are still in the “boys are gross” and “girls have cooties” phase, it might feel weird to talk about how to prequalify a romantic partner, but it is the perfect time to begin expressing qualifications without the fear of pushback.

Make sure to cover the basics clearly. Explain they should ensure romantic partners are of the opposite sex and genuine believers and that you have veto power over any relationship—at least through the teenage years.

These conversations can be awkward, but they don’t have to be hard. If you’d like help to start the conversations with younger kids, a guide such as Passport to Purity® can help. Because we started the conversations early, it wasn’t weird for us to inject ourselves into the process when our daughter was ready to date.

3. Stay involved even when you think they don’t want you to.

When our kids are little, their need for parental guidance is obvious. But when our kids get older, it’s easy to believe they don’t need us as much.

During our daughter’s high school years, she spent most of her time alone in her room doing homework. I knew she had a heavy workload, so I let her be. Later, when she moved to college, she confessed those were some of the loneliest times of her life. She would cry, hoping one of us would come in, but we rarely did. It is one of my biggest regrets.

The squeaky wheel might get the grease, but it’s not the only one that needs it. I thought my daughter needed space, but what she needed was for me to pursue her. Unfortunately, it was too easy for good grades and behavior to mask her needs.

All my “space” did was create distance and misunderstandings I had to work overtime to overcome.

Conversations about love interests are emotionally charged by nature. Don’t let the relationship with your child grow stagnant just when you need it to be strong. No matter what signals your child sends your way, make every effort to stay involved.

4. Develop a relationship with the person your child is dating.

The typical relational model between a father and his daughter’s romantic suitor usually evokes images of baseball bats and ritualistic shotgun cleanings. While one of your roles as protector is to help your daughter rebuff the advances of attractive, but not good for her, love interests, an emphasis on threats is counterproductive. The same is true for mothers. It can be hard to believe anyone is good enough for our kids.

Remember, there is a chance the young person dating your child could one day marry them. When that happens, the authority structure flips. Too many relationships have been ruined by a parent who only used force or manipulation to try and influence their child’s romantic choices. One day, the parent’s bluff is called, and they realize too late the weakness of their hand.

You don’t need to give away all your authority, but you can still find ways to connect. And, if you discover something about this person that disqualifies them from dating your child, your efforts to develop a relationship will give your evaluation much more credibility.

5. See any potential mates for who they are … and who they can be.

When I would meet with someone wanting to take out my daughter, I tried to be as clear as possible about my expectations, but I also kept in mind the young man standing before me was still … young. I couldn’t hold him to the maturity standards of a 40-something-year-old man. That wouldn’t be fair.

I needed to simultaneously see the man he was in that moment and the one he would one day be. I wanted to give him my blessing, but I wouldn’t give it away cheaply. I needed to first understand if he was what he must be to one day marry my daughter. Sometimes that meant a little mentoring on my part, but that’s okay. Why would I not take the opportunity to help a potential future son-in-law be the man God created him to be?

Our daughter’s fiancé spent hours in conversations with me. When the time came for him to officially ask for my permission to marry my daughter, there was little left to discuss. I knew they would have areas to work on and grow in, but I also knew the character of the man. He was up to the task.

How do I feel about the engagement announcement?

In many ways, I have been preparing for this moment since the day I first brought her home from the hospital.

Her marriage will mark the end of an era. I will no longer be the most important man in her life.

It can be terrifying to entrust your precious little girl to another man, but it doesn’t have to be. Soon, I will walk her down the aisle and give her away to a man I respect and trust.

My daughter got engaged, and I’m thrilled.

Copyright © 2022 by FamilyLife. All rights reserved.

Carlos Santiago is a senior writer for FamilyLife and has written and contributed to numerous articles, e-books, and devotionals. He has a bachelor’s degree in psychology and a master’s degree in pastoral counseling. Carlos and his wife, Tanya, live in Orlando, Florida. You can learn more on their site, YourEverAfter.org.

How Not To Be a Toxic Parent to Your Adult Child

Parenting an adult child is new territory for us, but my wife and I are learning. Here are five ways we’re trying not to be toxic parents. 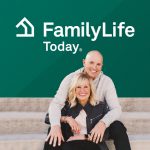 The Intentional Father: Choosing Time Together

with Jon Tyson March 18, 2022
Amidst the urgent -- & the pull of passivity -- how do dads carve out time together with kids? Author Jon Tyson helps you prioritize energy for what matters.