The Gambler Took a Chance on Marriage

Still reeling from a painful divorce, John Waring had no intentions of getting into a relationship with another woman. “I really felt like I had been burned, and I didn’t want to get involved with anyone else,” he says. 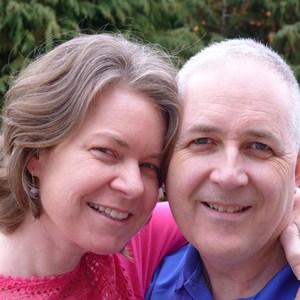 When he and Kimberlee met, they were in the singles group at their church. It was a gathering place for good fellowship and shared meals—not romantic relationships. John was drawn to her welcoming personality and they exchanged surface conversation. He thought she was nice; that’s all.

But things began to change on New Year’s Eve back in 1999. John was playing the role of a gambler in a murder mystery party at church. Something happened that amazed even John. He and Kimberlee began to talk and peel back the layers of their lives. The gambler took a chance and allowed his friendship with Kimberlee to go to a deeper level.

Soon John discovered that Kimberlee was not only fun to be around, but also a person he could have an intelligent conversation with. He felt so comfortable around her. And the more he got to know her the more he knew that she was just the type of woman he would like to marry.

John and Kimberlee got along so well that after just a few weeks of dating they talked about marriage. By Valentine’s Day they were engaged, and six months later they were married. No one was more surprised by the Warings’ whirlwind love story than John himself. He had not been looking for love … but somehow love found him.

Knowing the devastation caused by divorce, John did not want to be part of a failed marriage again. He and Kimberlee wanted to do all that they could to ensure that their relationship would succeed.

Looking back, he says, “It was a hard thing for me to commit to Kimberlee, but it was one of the best decisions I ever made.” And perhaps the next best decision was attending a Weekend to Remember marriage getaway in Colorado Springs, just a few months after their wedding. The Warings enjoyed it so much that they went again about six months later. And then again.

John says that the thing that stood out to him the most during the getaway was the love letter project for couples. Even today he and Kimberlee will pull out their old manuals and read the letters they wrote so long ago to each other.

And when the Warings think of their first marriage getaways, they remember how many of the speakers drove their messages home with humor. Maybe that’s why, years after hearing God’s blueprints for marriage for the first time, John and Kimberlee are still practicing things they learned, like the concept, “Your spouse is not your enemy.”

John says applying this simple truth in their marriage has been one of the keys to its success. Whenever there was conflict in his first marriage, he felt like he was the enemy. “I just didn’t feel loved,” he says. But today when Kimberlee and John have a disagreement, she will often say, “Remember, I am not your enemy.”

At times like this, they will once again recall the many principles they learned at the Weekend to Remember. Principles like letting one person talk at a time, and then reflecting back on what each heard. John says that didn’t happen in his first marriage.

They also recognize the importance of practicing forgiveness with one another and now understand why a lack of forgiveness is so destructive in marriage. But perhaps the biggest takeaway from those first weekends was realizing that God has a design for marriage. That the Creator of the world wants to relate with a husband and his wife through their marriage relationship.

The Warings were so excited about all they had learned at their first Weekend to Remember getaways that they wanted to help others. So they became event volunteers and started lending a hand in the getaway 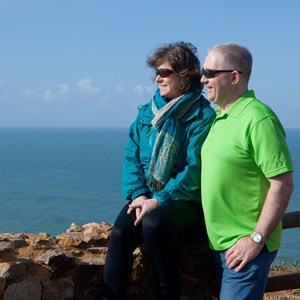 bookstore. Because both John and Kimberlee were self-employed, they were free to travel. So they traveled across the country helping at FamilyLife getaways in Alaska, California, Nevada, North Dakota, and Ohio.

The Warings enjoyed hearing stories from couples about how God had worked in their marriage during the getaway. “It was outstanding to be part of a team where God is doing something like that,” John says. “It is God’s work … but as a team we all shared in making that happen.”

John says he will never forget the time when a couple walked into the lobby of a hotel where he was setting up a getaway bookstore. Along with them was a judge who was going to marry them in the hotel. The engaged couple needed some witnesses for their marriage vows. So John, Kimberlee, and two of the hotel staff volunteered.

Then after the ceremony, someone from FamilyLife gave the young couple a certificate to the Weekend to Remember. So the couple attended the getaway that same weekend. And by the end of the conference they had both made decisions to follow Christ.

John was born in the United Kingdom, and he and Kimberlee returned there about five years ago to be near his family. He is a computer repair technician in Church of England schools. And the good news is that he has seven weeks of vacation each summer. During part of that vacation you can find him back in the United States. He not only sees his son and other loved ones, but also volunteers at FamilyLife’s headquarters in Little Rock.

Over the years John and Kimberlee have had plenty of opportunities to put into practice what they have learned about God’s plan for marriage. Parenting in a blended family was hard. And Kimberlee has experienced chronic pain that has gotten increasingly worse.

But rather than allowing these issues to pull them apart, they have remembered what they learned at the Weekend to Remember. That God Himself wants to be involved in their marriage. That He knows what He’s doing.

“This is not what John expected when he said his vows to God and to me,” Kimberlee says.  “I am not saying that life is easy by any means,” Kimberlee says, “but our perspective is that we are one and God is on our side.”

When the Warings laid the foundation for their relationship at those first Weekend to Remember getaways, they learned that marriage requires a 100 percent commitment from both the husband and wife. “The impact on our marriage is that sometimes one of us is actually giving ‘more’ than the other,” Kimberlee says.

John is grateful today that he made a decision long ago to gamble on his relationship with Kimberlee. But rather than just rolling the dice in their marriage, he and Kimberlee began their lifelong relationship learning about God’s blueprints for their home. “If you put biblical principles into practice,” John says, “you can have a successful marriage.”

The Men We Need: Brant Hansen

with Brant Hansen December 5, 2022
When's a boy become a man? On FamilyLife Today, Dave and Ann Wilson host author and radio host Brant Hansen, who weighs in on toxic masculinity, lies about manhood, and the kind of men we need.