I Decided to Give the Whole ‘Faith’ Thing a Try

During the early years of their marriage, Jim and Nina Roesner made some life-changing decisions at Weekend to Remember getaways.

“I’m not going to marry you if you’re not a Christian,” Jim told his longtime girlfriend, Nina. The couple had dated on and off throughout college, and then they reconnected during graduate school. They enjoyed each other’s company, but there was one major problem—Nina was a self-proclaimed atheist and Jim was raised in church. 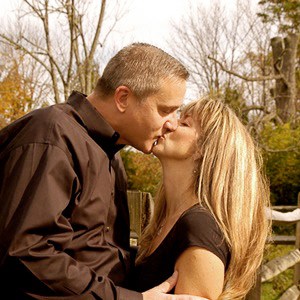 Jim’s new conviction about who he should (or shouldn’t) marry stemmed from his relationship with his boss, a Christian who had begun unofficially mentoring the young Jim. He encouraged Jim to consider the long-term effects of his relationship with Nina, questioning their spiritual compatibility and asking questions like, “Do you know the purpose of marriage?”

Jim started to feel convicted over his relationship with an atheist, and he drew a line in the sand, refusing to marry Nina because of her beliefs. Not wanting to lose Jim, Nina says she “decided to give the whole ‘faith’ thing a try.” She started going to church with Jim, trying to figure out what all of it meant.

Already living together, Jim and Nina’s physical chemistry was strong. Even though Nina still wasn’t saved, they were soon engaged. “I’m really not sure why he decided to marry me. He probably shouldn’t have,” Nina says. “I was a career girl and he wanted five kids. We were just so different.”

“God has a plan for marriage, and that plan just makes sense.”

Before their wedding, Jim’s boss encouraged the couple to attend a Weekend to Remember®, FamilyLife’s three-day marriage enrichment event. “My boss told me about Matthew 7:24-27, where Jesus says that a wise man builds his house on the rock. He explained that we needed to build our marriage on the foundation of Jesus Christ,” Jim says.

The concepts for Nina were just as new and inspiring. For example, she had never heard that sex was something that was beautiful and honorable. She also learned that sexual intimacy in marriage was a bonding experience between husband and wife, designed to solidify a promise. “That first conference made physical intimacy something important instead of taking it for granted,” Nina says. “For the first time I heard that we honored God by honoring each other.”

Nina was impacted by the story of the woman at the well, how Jesus told the woman, “You’ve had five husbands.”

“She needed to be healed of her baggage,” Nina says, “and so did I.” She and Jim decided to stop sleeping together until they were married. And as a result, Nina says, “It gave us a whole new level of respect for each other.”

But the event did more for Jim and Nina than just purify their relationship. At the end of the weekend, the couple stood up to give their lives to Christ. Nina and Jim walked with a group of people to the back of the room where event staff were waiting to talk to them about their new faith. “The woman I talked to was really excited for me. That was new,” Nina says. The worker recommended some books that encouraged Nina to keep moving forward in her faith.

“We didn’t have the same goals in life.”

After they were married, the couple started representing FamilyLife to their church, putting up posters to promote the Weekend to Remember getaways and shipping brochures and other materials to churches in their area. They also helped teach HomeBuilders, FamilyLife’s small group Bible studies for marriage and family (now called The Art of Marriage® Connect Series).

But after about four years of marriage, the newlywed high wore off, and Jim and Nina’s differences in their decisions about family began to show. “We just didn’t have the same goals in life,” Nina says.

They went to another Weekend to Remember getaway during the midst of their struggle. At one point, the men and women split and went into two different rooms. “This beautiful girl began to talk about what a privilege it was to have a career in motherhood,” Nina says. That was the first time she had ever heard such a concept, and it was quite challenging to her.

Nina and Jim returned to their hotel room, and Nina stood in the bathroom looking down at her birth control pills, contemplating all she heard in the women’s session of the conference. “Do you remember how you want five kids and I don’t?” Nina said to her husband, Jim. “I think God wants us to have kids.” And she threw her birth control pills away, right there in the bathroom of the hotel room.

Now, 25 years married, and three beautiful children later, Nina is so thankful for the leading of the Spirit in that moment. The Roesners have even branched out into their own marriage ministry called Greater Impact Ministries. Nina is the author of The Respect Dare and co-author of With All Due Respect, helping women have better, godlier marriages.

“We aren’t learning about how marriage works in the media.”

Nina and Jim continue to use and endorse FamilyLife materials through their ministry and their church. “We promote it like crazy,” Nina says. They give Weekend to Remember gift certificates for wedding gifts, and they recently took one of their daughters through Passport2Purity®, a resource that helps parents teach their children about sex.

Both Jim and Nina agree that any married couple should go to the Weekend to Remember getaway. Jim would especially encourage pre-married and newlywed couples to attend, so they can learn what really works in marriage like they did—”especially those seekers who are curious about God,” Jim says. “We aren’t learning about how marriage works in the media, and FamilyLife does a good job of presenting God’s plan for marriage in a non-threatening way.” Jim and Nina have certainly benefited from the event, and as a result countless others have been touched by their ministry and their testimony.