We now have the tools to make our marriage work, and we’re sharing them with others.

Dating Derrick was a joy. We not only spent time getting to know each other, but also attended church events together and participated in community outreach projects. His proposal was planned and very romantic. We prepared a marriage ceremony and reception that gave God the glory, and we thought that our life together would be great. 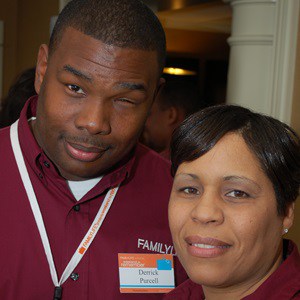 But there was a problem: We had no idea how to be married. Reality set in after our honeymoon.

Derrick had the “I am the king of this house and you will serve me” syndrome. After being single for 33 years, he wanted all of the attention on himself. His parents had always praised him and he expected the same from me. He said that he felt like he received more respect at work and from friends than he did at home.

I had been a single mom for years and had worked hard raising my girls all alone. I wanted to be “queen of the house” and felt like my king should serve me. I thought I deserved this after doing things for myself and everyone else for so long. I wanted Derrick to do life my way while pampering and spoiling me.

We didn’t recognize God in our marriage, but pretended it was perfect when we were in front of our friends or at church. We lived more as roommates and didn’t know how to compromise. Working at marriage was foreign to us. We thought since we were Christians, marriage would just work itself out.

Neither of us was willing to budge—we were both very stubborn and selfish.

To make matters worse, our marriage began with three children. They felt that the attention they had received all of their lives was going to someone else. Neither of us anticipated the challenges of a blended family, and we didn’t have the tools to make the situation any better.

After four years of an unhealthy and weak marriage, I heard a radio advertisement for a Weekend to Remember® marriage getaway. I thought that we should give it a try. Derrick agreed to attend and told me, “Now you will see that I am right and you are wrong.” And I just knew that “now Derrick will see that he’s the reason our marriage isn’t working.”

When Derrick and I attended the Weekend to Remember in Hunt Valley, Maryland, we both wanted to make our marriage work. After the sessions on Friday night I thought, Oh, God, this is beautiful. We’re going to work it out.

The conference was an eye-opener for Derrick and me. We learned that we were each other’s gift from God and that the Lord needed to be at the center of our relationship. Although we received so much wonderful information at the Weekend to Remember, we were afraid that things would go back to the way they were when we got home.

A turning point occurred at the getaway when we participated in a sample session of FamilyLife’s small-group Bible studies for couples [now called The Art of Marriage® Connect series]. At that point we started getting excited about our future. We had been living a lie for so long, pretending we were happily married. We decided that these studies were the follow-up that we needed. The study was fun—not intimidating. And we knew that it would give us an opportunity to meet with other couples. When we won a small-group starter kit we thought, “This is absolutely from God.”

We began our first small group in May 2007 with some friends. When we told the couples about our struggling marriage they said, “We would never have believed it.” Until that day, we hadn’t shared about the things that we had been going through. We had been ashamed and hadn’t known how to fix our marriage problems until we attended the Weekend to Remember. And then The Art of Marriage Connect studies reinforced what we had learned there.

Derrick and I have facilitated many different small-group studies for couples in the last few years. Now the Weekend to Remember directors for the Maryland and Delaware areas, we are committed to helping marriages grow stronger and healthier through FamilyLife’s rich resources!

Today Derrick and I know how to laugh together. We know how to strengthen one another. We’ve learned that our marriage is not about me wanting him to make me feel good or about him wanting me to make him feel good. We’ve each had to make the decision to serve God first.

In serving the Lord I’ve learned to serve my husband. I’ve learned to accept Derrick unconditionally and now allow him to be the man of God and the leader of our home that God has called him to be. In doing this I not only gained a husband, but also gained a friend. I had to let go of myself to receive what the Lord had for me.

I’d describe our marriage today as very harmonious. Yes, there are issues from time to time … there will always be something … but Derrick and I know what to do when those issues come up. We’ve learned that we have to come together when it gets all rough outside and that everything will be okay when we are anchored in Christ.

Sometimes I sit back and think, My God, I cannot believe that we have come this far. Derrick and I were two very strong-willed people who just would not budge. But now we have the tools to make our marriage work. We’ve learned to do marriage God’s way. And we are sharing what we’ve learned with everyone we meet!