Go Back To All Media and Entertainment Articles

FamilyLife’s first film is meant to be a glimpse into a path that can take you deeper into parenting the heart of your children.

For a movie that just received the two top awards at a Christian film festival, you wouldn’t expect that Like Arrows was originally intended as a small-group parenting study. When director Kevin Peeples was approached about writing and directing a story on parenting, it was pitched as a video element for the upcoming video curriculum, FamilyLife’s Art of Parenting® . There was only an outside chance that it could become something more.

The final product, though, has exceeded expectations. Like Arrows, which premiered in theaters in May 2018, received Best Film and Audience Choice honors at the Christian Worldview Film Festival in Nashville, Tennessee. It’s FamilyLife’s first feature-length film.

Peeples says he was first approached by Alex Kendrick (War Room, Courageous, Facing the Giants) about the project. “I was told that FamilyLife wanted a feature-film story arc that would bridge across six 10-minute segments—that when the video curriculum was completed the viewer would have seen an entire feature film, or a single continuous story,” he says. “Each episode, or chapter, would be a different period of time in the parents’ 50-year journey.

Peeples signed on to the project because he liked its message on parenting. Before Like Arrows, he directed a couple of documentary films, a successful Christian apologetics YouTube series, and countless commercials. Kevin and his wife, Dinika, head up Pro-Family Films, which creates original films that uphold a gospel-centered worldview of marriage, children and family. 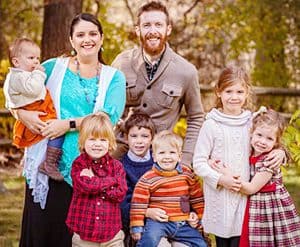 Kevin and Dinika Peeples with their children.

“We desire to tell stories that encourage and strengthen the family to embrace the full gospel picture in the covenant of marriage. It is a beautiful partnership to be able to work with FamilyLife as our visions are set so closely. We are thankful for the opportunity! The family is under attack, the effects of which are crumbling our society, and I believe that we and FamilyLife understand that change begins in the home. The symptoms won’t go away until we fix the heart of the problem.”

Kevin and Dinika don’t just know about filmmaking. With six children and another on the way, they know a lot about the blessings and challenges of parenting. And that shows through Kevin’s role as co-writer.

“I wrote [the main character of] Charlie for every dad, and he really speaks to my own failures as a husband and father,” Peeples admits. “It’s painful to watch him in the beginning at his worst and wonderful to see him transform through the gospel. It leaves me asking myself, Why am I still making these same mistakes? I hope many dads ask the same thing.”

God is the redeemer

Apparently Like Arrows is making an impact. “I’ve been approached by fathers who say the film has encouraged them to keep praying for their prodigal children, and most people say there’s at least one scene that’s straight out of their own memory books. I think what’s come out of it is the message that it’s not too late. There’s still time. God is the redeemer of lost time and so faithful to His promises.

“Because the film covers 50 years of time in a couple’s parenting journey, there are really moments for everyone. We’ve even been approached by teenagers who say they’re glad they’ve seen it because it shows them what to prepare for, and what mistakes to avoid—mainly the mistake of thinking everything will go smoothly because their parents did okay and they turned out fine.”

Peeples says filming the scene where Charlie and Alice become grandparents was probably the most emotional on set.  “I asked them not to rehearse it before hand, and if it weren’t for needing emotional close ups, we had the scene in one take. It was so powerful, as that’s a moment you look forward to but aren’t prepared to be thrust into like that. We were all in tears, and just trying to keep quiet!”

Family—and faith in God—shows through strongly in the film, not just because of the script and directing, but also because of the real-life, behind-the-scenes happenings throughout the course of the filming. 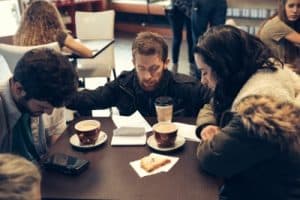 “We didn’t have all of our locations booked and we hadn’t even cast the entire film when we had to begin filming. Talk about prayer! Additionally, we knew we needed a newborn baby but there’s no way to schedule when a baby would be born, and we had midwives on alert. We got a call after the first day of filming that a baby was born and we could film the next day. God gave us exactly what we desired and the baby was perfect for the film.”

God’s ways are not always man’s ways. In recent years, many films have been released, accompanied by a host of marketing resources to promote the franchise. Like Arrows flips that on its head. Peeples points out that the film is more of a “Session 0” for the video curriculum series, FamilyLife’s Art of Parenting.

“It’s a new idea to have a film created just for a curriculum,” Peeples says. “Like Arrows is meant to be a glimpse into a path that can take you deeper into parenting the heart of your children. It intentionally leaves some questions open ended. I believe we set out to create an emotional connection to the topic, so audiences can relate to the experiences that parenthood brings, so they’re more prepared to receive the guidance and instruction that FamilyLife desires to provide, which will point everyone back to Scripture.”