The Legacy of an Ordinary Woman

What difference can one person make in a world filled with seven billion people?

Approximately 57 million people died in 2008. One of them was the famous actor Charlton Heston; another, the genius chess player Bobby Fisher. Then there was Kathleen Doud, who died on June 16 that year.

Kathleen’s friends would describe her as just an ordinary woman. She never accomplished much in the business world. And her wealth sure couldn’t be compared to that of philanthropist Bill Gates. She was a pauper by affluence’s standards.

The fact is that some people today might even consider her to be a “nobody”—a person they never knew … someone they don’t care about remembering. After all, what difference can one ordinary woman make in a world filled with over seven billion people?

Just one person who died several years ago. And yet I’ve been thinking a lot about my friend Kathleen lately.

Kathleen left a priceless legacy. Her passion to share the love of Jesus Christ was vibrant, like the multicolored zinnias she grew in her garden.

I can still picture Kathleen sitting behind the welcome desk at our church. Nearby was a huge bouquet of colorful zinnias—cut from her garden, of course. Who would have guessed that behind her broad smile was a woman who had struggled for more than two decades with cancer? And how could she look so proper in her church dress and freshly sprayed hair, and yet feel comfortable with absolutely anyone?

Look in their eyes

My husband and I often sat behind Kathleen and her husband, Barnie, on Sunday mornings at church. I 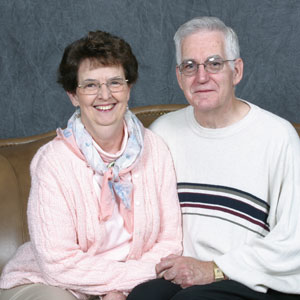 couldn’t help but notice the uncommon friendship they made with a couple who frequently sat nearby. The Douds were in their sixties then, and their sons were grown.  This young couple was in their twenties, and they had a baby. One glance at Barnie and Kathleen might make a person think of Sunday suits and chicken dinners and hot apple pie, while tattoos and piercings decorated the bodies of the younger couple.

Kathleen told me about the day she and Barnie took their new church friends to their “farm.”  In reality it was just a small plot of river land in a community garden where Barnie and Kathleen grew zinnias and vegetables. Kathleen said that the young couple had seldom seen vegetables growing and were amazed at the handiwork of God.

“How did you keep yourself from getting distracted by all of the tattoos and piercings?” I candidly asked her.

Her answer was simple:  “I looked into their eyes.”

When the young couple looked back, perhaps they sensed the very gaze of Jesus Christ Himself—filled with nothing but unconditional love. As Barnie says, “Kathleen had a love for all people.”

For many years Kathleen led a group of girls who called her “Mrs. Kathleen.”  Emily Jones was one of them.

Not too long ago, Emily was asked to write about someone she admired; she chose Kathleen Doud. “When I was in the fifth grade,” she began, “I became very good friends with a lady at my church. She was somewhere in her sixties and her name was Kathleen. Her husband’s name was Barnie and they were the sweetest couple ever. Everybody thought so and everybody loved them.

“Every Wednesday night about 15 fifth- and sixth-grade girls would get together at my church with Mrs. Kathleen. She would tell us Bible stories, play games with us, and we would all sing songs together. It was always very fun. Every night brought something new. All throughout the week I was never able to wait for Wednesdays to finally come …”

Thinking of how God worked through Kathleen to impact her life, Emily calls this ordinary woman “my heroine.” She says, “Mrs. Kathleen … helped me see that every person, no matter what they’ve done or who they are, is important.”

Emily and her friends were not the only ones who sensed Kathleen’s value for others. Cancer survivor Arlene Kirk remembers her well. “Kathleen always had a smile,” she says, “and was ready to witness for our Lord whenever you saw her . . . even when she was in the middle of her chemo and not feeling well at all . . . or when her medicine was not working like it should.”

Arlene heard the oncologist say what a witness Kathleen was to him and to everyone around her. And Arlene agrees. “Kathleen never let up with her witnessing, traveling, doing, even though at times she was very ill.”

Her legacy lives on

God didn’t call Kathleen to be successful in the world’s eyes, but He called her to be faithful. And that she was. She consistently sowed the love of Jesus Christ in her home, in her church, and wherever she went.

Once again this spring I planted zinnia seeds into the moist soil and wondered, How many fields will be covered in blooms of orange, and yellow, and red because of Kathleen’s original seeds? How many lives did she touch … and how many is she still touching today?

Kathleen Doud was somebody. Somebody extraordinarily famous in God’s eyes.

Somebody who left an amazing legacy.

Somebody I will always remember.

“Some people come into our lives and quickly go … some people stay awhile and leave footprints on our heart and we are never the same.” —Flavia Weedn