Passionate About Helping Marriages in Our Church

When I was 14, my parents divorced. So I can tell you firsthand that divorce brings heartache to children. I’ve not only seen this in my own life, but also in the church where I serve as executive pastor of education—First Baptist Church in Jacksonville, Florida.

Statistics have shown that divorce is as prevalent inside the church as it is outside of it. Many couples at our church are struggling; some are in their second or third marriages. And when so many couples experience marital problems, it has a profound impact on a church.

Everyone has them. It doesn’t matter if you’re a pastor, a Sunday school teacher, a member sitting on a pew—or even if you don’t go to church at all—we all have to work on our marriages. A good marriage is not something that just happens.

A couple of years ago we started talking about what we could do to address divorce in our church and in our community. We began searching for a marriage conference that would help provide a place where people could come and be honest about the struggles they were having in their marriages.

The Art of Marriage®

Our high school pastor had attended FamilyLife’s Weekend to Remember® marriage getaway. He said it was probably the best thing that he had ever done with his wife.

Wanting to do something similar at our church, I called FamilyLife and learned about The Art of Marriage® video event. It’s designed for a weekend event in a church, community, or home setting. The topics of its sessions sounded intriguing and I liked the fact that it also included projects for the couples.

I ordered the kit and asked if there might be someone at FamilyLife who could help us. We are a large church with 4,400 people regularly attending Sunday school and worship. 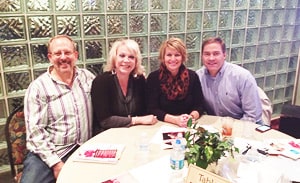 With the help of Jeff Kemp, who works with FamilyLife, and his wife, Stacy, we held a life-changing event at our church February 7-8, 2014. Nearly 300 couples attended our Art of Marriage weekend and the positive responses were overwhelming.

I think that marriages were able to change in such a short period of time because they were confronted with the Word of God. When you are in an atmosphere where you are talking about the Word of God for hours on end, working on projects, you’ve just got to be honest with one another.

One wife said that she and her husband had been separated for four months when they decided to give The Art of Marriage a try. “After coming to this event,” she said, “I have decided to move back home with him.”

Another said, “I realized I’ve been trying to do it my way instead of God’s way. It’s not about changing my spouse, but me.” 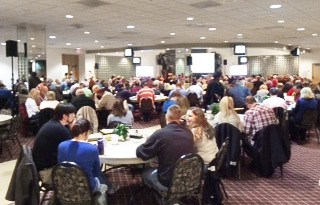 And then there were the eight individuals who committed their lives to following Jesus Christ.

Changed lives … changed marriages … changed legacies. Isn’t that what pastoral ministry is all about?

I believe that the more churches do to strengthen marriages, the more we will bring glory to God. That’s because people will see a picture of oneness when they see the unity of a sinful man and a sinful woman in marriage. Oneness that is only possible through the power of Jesus Christ.

One woman, who came to the event with her ex-husband, said: “God is restoring us. God was not in our marriage when we divorced. … Thank you, Jesus, for this conference.”