Go Back To All Church Involvement Articles

Building Relationships That Will Last a Lifetime

Authentic community between believers demands that the real you is willing to meet the real needs of others.

I remember one of the first times my wife, Theresa, and I had the chance to really experience what it means to meet a real need. Early on in our marriage, we were growing Christians, giving the first portion of our income to the Lord’s work, involved in a small group, discipling others, and looking for opportunities to help those in need. We had just moved to Dallas, where I could attend seminary to prepare for vocational ministry. We moved into a government-subsidized apartment complex that was filled with seminary students, dental students, drug addicts, and all sorts of people who had one thing in common—economic need! It wasn’t long before we befriended our upstairs neighbors.

Pat had a small boy about the same age as Eric and Jason (my two oldest boys) and they spent hours playing together. Pat (a fellow believer) and Theresa became good friends and we were thrilled when Pat’s second child was born, about a year after we met her and her family. I never got to know her husband very well, as he was on the road a lot, but I do remember vividly coming home and being greeted by a very distraught Theresa. As it happened, Pat and her husband were having problems and Pat’s husband had left her that morning. She had no money, no job, a newborn, and no way to pay her rent.

Theresa consoled Pat, prayed with her, and helped out with the kids. As it came time to pay our rent, Theresa and I had one of those conversations that you think “just might be God’s will,” but you’re almost afraid that it is. As we talked late one night, we both sensed that God was moving us to pay Pat’s rent so she wouldn’t be evicted. This would buy her an additional month to make arrangements for her and her family’s housing.

The only problem was that if we paid Pat’s rent, we couldn’t pay ours. The timing of the two rent payments was about ten days apart and it certainly seemed like the height of insanity to pay her rent, knowing that we would be left with only ten dollars in our checking account. But in this case, despite our inner protests, the Spirit of God made it clear to Theresa and me that we should take a step of faith and meet a real need for our sister in Christ. It was not noble and we were not being super spiritual; the Lord had made it absolutely clear—it was merely a matter of obedience.

By faith, we paid the rent and I expected the Lord, in some wonderful way, to allow me to make extra money in the next ten days to pay for our rent. Unfortunately, our rent came due and we had no money. We had a grace period of three days, and on the final day when I had come close to losing all hope and being more than a little upset with God, an envelope came in the mail. A check for a thousand dollars was in the envelope from a friend of a friend whom I had not seen in ten years. It only said that he was prompted while praying to find out where we lived, what we were doing, and to send this to us.

This was the first of many lessons God would teach us about faith and how He literally wants us “to lay down our lives for one another” (1 John 3:16). I previously thought things like this only happened in books and to select “spiritual giants” in the faith. What we learned was that God is eager to act powerfully on our behalf when our motive is to meet the real needs of fellow Christ-followers.

Authentic community is more than sipping coffee and sharing Bible verses in a living room. It’s more than being nice to one another in the hallways of the church and it’s even more than dropping off food when someone has a baby or is coming home from the hospital. Authentic community demands that the real you meet real needs.

Pat was overwhelmed by the grace that she experienced and profusely thanked us in tears as she held her brand-new baby in her arms. We were in awe of God’s provision for us, after He had pushed us out of our comfort zone to believe that the God who created heaven and earth could take care of our needs if we were willing to trust Him in an effort to love someone else.

Love must be sincere. Hate what is evil; cling to what is good. Be devoted to one another in brotherly love. Honor one another above yourselves. Never be lacking in zeal, but keep your spiritual fervor, serving the Lord. Be joyful in hope, patient in affliction, faithful in prayer. Share with God’s people who are in need. Practice hospitality.

These verses can be summarized in this way: Authentic community occurs when the real you (verse 9) meets real needs (verse 10) for the right reason (verse 11) in the right way (verses 12-13).

These two commands are simple but powerful. They focus on the two prerequisites for meeting the real needs of others—devotion and humility: “Be devoted to one another in brotherly love.” What does it really mean to be devoted to one another in the body of Christ? The word devoted here is the Greek word Philadelphia. Its root meaning has to do with special and intimate affection, which is proper among Christians. It is an all-embracing love between family members that is also appropriate in the church.

The use of brother with reference to the adherence of the same religion was, of course, not particular to Christians in the ancient world. It was common also to Jews and other religious communities in Egypt. To “be devoted to one another in brotherly love” was to regard other members of the body of Christ as you would your immediate family. The same concern and protection you would extend, and the same sacrifice that you would make, to your own father, mother, or sibling is now commanded as “the norm” for all Christ-followers in their relationships with one another.

Although it was a big step of faith for Theresa and me with Pat, God did more than pay her rent and “wow” us with His power. A bond developed between us and her that we’d never experienced before. Jesus said, “Wherever your treasure is, your heart will be also.” And this one act of placing our treasure toward meeting Pat’s need created a new depth of authentic community.

Without knowing it, we were obeying the two commands of Romans 12:10. Until we understand the importance of devotion as a core component to building authentic community, we will see our faith and relationships as merely a “nice club” or social group. The early church took quite seriously this command “to be devoted” to one another—at times at the cost of its brothers’ own lives.

Merle: A picture of devotion

Perhaps a nonspiritual picture of devotion will help you grasp the intensity of this command. It is what I observed nearly every night as a freshman in college. I roomed with a wrestler who later became an all-American. He was a picture of devotion.

Merle wore a plastic suit at night in order to sweat and lose weight. Before he went to bed, he got out a deck of cards and pulled a small wheel with handles on it from under his bed and flip over a card. Whatever the card said with regard to the number, he did that many repetitions with his wheel, pulling it out in front of him to develop his abdominal and chest muscles. He would go through an entire deck of cards before he went to bed.

It made me hurt just watching him. Afterward, he’d take the deck of cards and go through the same process for situps. To say that Merle was devoted is an understatement. He was a picture of devotion; he didn’t miss a night, and he was willing to pay a high price because his training really mattered to him.

Jesus: The perfect picture of devotion and honor

The most profound picture of real needs being met out of humility and devotion is the cross. Jesus was devoted to you and me to the point of sacrificing Himself in our place to meet our biggest need—the forgiveness of our sins.

Who, being in very nature God, did not consider equality with God something to be grasped, but made himself nothing, taking the very nature of a servant, being made in human likeness. And being found in appearance as a man, he humbled himself and became obedient to death—even death on a cross! (Philippians 2:6-8, NIV)

The cross is the greatest example of humility and devotion in the universe. Jesus put your needs ahead of His own. He considered you more valuable than Himself. So what might it look like for you to follow His example?

What are some real needs of the people in your relational network? What initiative could you take to meet some real needs in your community, your church, your small group, or in your family? Where did God speak to you about being devoted to someone or giving honor to someone? As we shared in the beginning of this chapter, the price is high, but the rewards are immeasurable.

Adapted from Living on the Edge, ©2009 by Chip Ingram. Published by Howard Books. Used by permission. All rights reserved. 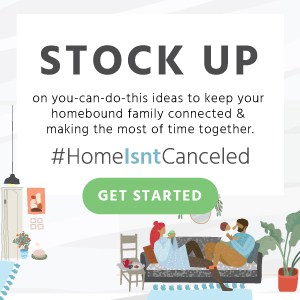 Despite most of life being canceled for more than a month, despite loss and disconnection everywhere-You’re smushed inside.  Home is everything but canceled.

But what if quarantine and recovery mean your family grows stronger?

We’ve got ideas to help you grow more